Today the Internet virtually slowed down 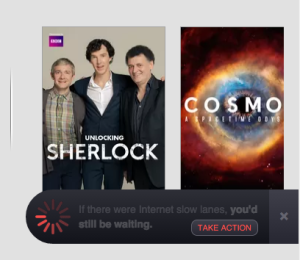 Or, at least several major sites wanted you to know what it might feel like if it were to slow down permanently due to what they say may result in Internet “fast lanes” where companies would be able to purchase the ability to have their sites served faster than others (ala, the Comcast/Netflix agreement made earlier this year). This would potentially disrupt what we’ve all come to know and love as the digital economy of the Internet.

Meaning, if another movie / tv streaming content provider tried to enter the market today without the ability to sign a similar agreement (if only because they were new) they would be unable to even attempt to compete and thus their service would fail before users ever had a chance to try something that may be better or more innovative than the current big kid on the block. While even without net neutrality, enforcing payments like this (rather than the two companies voluntarily entering an agreement) would be legally hard to do today due to current antitrust laws, that doesn’t mean the little guy still wouldn’t find itself in a precarious situation – but perhaps that’s as it should be given the ups and downs of the digital economy.

What is the purpose behind this? Well, the telecom infrastructure in America is largely owned and maintained by private businesses including but not limited to Level 3 Communications, TeliaSonera International Carrier, CenturyLink, Vodafone, Verizon, Sprint, and AT&T. You might recognize the last three as companies from which you purchase your Internet connectivity. It is in their interest to make a profit. But, from what they tell us, it is hard to do that while maintaining and innovating on the infrastructure at the same time.

To my understanding (which could be wrong, I am not a networking expert – feel free to correct me), companies are fighting against the need to use a standard which treats all data the same regardless of what is being carried (i.e. TCP/IP). As an alternative, each company would able to create their own innovations that would help their own networks move data along without that technology necessarily being shared with everyone else. Without chiming in on one side of the debate or the other, this could be very good for consumers in the long run as competition in this area would drive innovation further and further.

The fear is that while competition has somewhat driven the cost to connect down on the consumer side, these companies must find another way to make profits and are looking toward the providers of digital goods as a potential revenue option. To that end, many see these infrastructure companies’ waves against net neutrality as an attempt to charge content providers money to ensure their data reaches their customers as fast as possible. This idea is comparable to a tollway company claiming their roads need maintenance and thus charging stores along the tollway, that have no other way to access them, extra fares to make sure consumers can access the offramps to those stores without delay, while also collecting money from the consumers themselves in order for them to gain access to the tollway in the first place. However, as I said above, this would be difficult to do given the antitrust laws currently in place.

I hope I’ve been able to some what enlighten people as to what the big deal is and I hope I have shed some light on the topic that is not as black and white as most of us have been lead to believe. The lesson to be learned, as with most things on the Internet, is issues such as these aren’t always necessarily as they first appear and a little research goes a long way. This is especially so where government and technology intertwine.

GDPR, Blockchain, and Me

This site uses Akismet to reduce spam. Learn how your comment data is processed.