As you may have recently heard, Twitter and Facebook are in the news due to their recent grilling on Capitol Hill. What is interesting to me about this, regardless of how you feel about the companies and the services they provide, is that not being public utilities they are not susceptible to government regulation.

Rather, they are private companies who have Terms of Service (ToS) people agree to when signing up that state they can ban or remove any content or users they find don’t meet their community standards. This is the same idea that companies all across the U.S. embody when they say they can refuse service to anyone. This is their freedom as a company and has nothing to do with individual rights. You do not have any first amendment rights except for in the presence of GOVERNMENT censorship. It has nothing to do with privately owned spaces including social media platforms. The fact is, social media platforms are for-profit companies who make money when people post their own opinions to them and they make a LOT of money when those opinions are contentious. It is in their own best interest NOT to censor their users when their users are operating within their ToS.

Thus, none of this makes sense for Congress to step into. There are several legal precedents for the government staying out of media-related industry censorship, which is why entities like the MPAA, CCA (now defunct), and ESRB exist – all being industry self-regulating bodies.  That said, maybe it’s time social media platforms establish their own so there are standards and regulations across them and content can be rated rather than completely removed. This would certainly help people avoid content they didn’t want to see and could allow for space where more objectionable content could exist within its own bubble that people could venture into at their own risk.

What SHOULD be of concern is personal data privacy. But, we all know that isn’t going to get anywhere. Those of us who do work in this space been touting the issue of data privacy for several years to no avail. I don’t see it becoming a priority any time soon.

Techcrunch has a great rundown on the most recent Facebook scandal. If you haven’t heard of Cambridge Analytica before now, please take the time to read the full piece. One of the most interesting points to come out of it is Facebook stating that it’s “open to regulation”. If you’re a reader of this blog, then you know that I’m very interested in government regulation around our information and data. I’ll be keeping tabs on that as the story continues.

As always, you can read my multiple blog posts on Facebook for a better understanding of what you give up when you provide the company your data. Bottom line, if you don’t want others having your data without your permission, don’t post it on the web.

Two headlines recently made the news. The first was the World Health Organization’s consideration of adding “Gaming Disorder” to their International Classification of Diseases. The second was how our mobile devices are making us stupid. Both of these have more in common than you might think. What gaming has that makes it addictive is often utilized by the same dark patterns that power much of today’s social media interactions. Most notably, interactions that cause dopamine responses. The problem with these artificial (aka computer-mediated) interactions providing a dopamine release is that if you lack in-person interactions that are the biological basis for dopamine responses, you’ll turn to artificial ones to supplement them.

When artificial interactions work better, faster, and easier than organic ones at providing a dopamine high, they might induce a person to engage in an addictive relationship with the artificial interaction at the expense of an organic one. In layman’s terms, this may cause a person to have problems in their daily life due to their detrimental relationship with technology. For example, a person may forgo an in-person interaction to engage in an artificial one because they find the artificial one more compelling. These may start out as situations like skipping out on going to dinner with friends to instead engage in synthetic interactions but may escalate to neglecting essential responsibilities such as going to work or school.

The real question is, is the subject matter that induces the dopamine response to blame for the addictive relationship that is developed or is the environment where the person cannot find organic interactions that would produce such natural and beneficial reactions responsible for the resulting addiction of looking for them elsewhere? Careful consideration should be made here as people who are diagnosed with an addiction to a particular trigger are thus restricted from engaging with that trigger in the future. What would this mean in situations where grade-school students are diagnosed with gaming disorder and are thus unable to do their school work because their school utilizes game theory and electronics in much of their teaching? What happens when someone recklessly engages in social media and thus is forced to give it up, but must interact in a similar environment for their careers such as utilizing tools like Slack or office Intranets?

Should the underlying cause of addiction not be of more concern than those places to which people look to supplement their natural human needs? What can be done as designers and researchers in these areas to bring possible addictive behaviors to the attention of the user before they go too far? Are businesses at risk of losing revenue by putting the customer’s behavior and mental, physical, emotional health first? Should they be responsible when a user becomes addicted? If so, to what end?

While you may have never asked yourself this question, you may have had friends or family that passed on and wondered what happens with their account now as it stands in tribute to their memory. 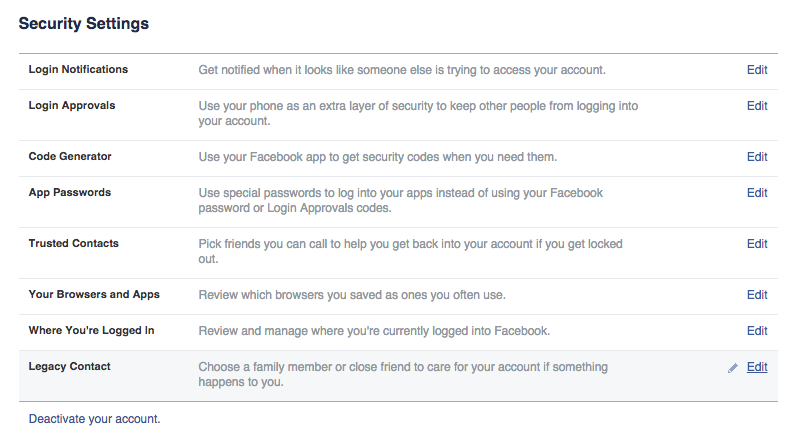 Would you use this? Why or why not? Though it does grant someone else access to your account, it is somewhat limited and you can decide whether or not you want to allow your benefactor the ability to download your Facebook content.

This is a fun little social media experiment…

Fast Company is searching for 2010’s Most Influential Person Online. You are more influential than you think. http://fcinf.com/v/cuyv